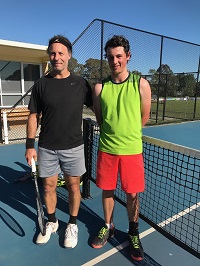 The Berwick Tennis Club 2017 Senior Club Championships were completed on the 12th November. The annual event was contested by the Ladies and Gentlemen who were current financial members.

The event had good entry field once again. The event went over three Sunday weekends, with a round robin format on the first Sunday and followed by knock-out rounds to finals. The event ran as well as expected with some minor detours along the way but the weather was kind once again.

The Ladies singles and doubles was completed on the first Sunday. Thank you ladies for participating.

We would like to thank all the club members who participated in this annual club event. It’s a great enjoyable social gathering for all who attended and took part in competing. Hoping to see the event getting bigger and better next year once again.

The presentations were held at the Club’s Christmas Party on the evening of Saturday 16th December 2017.

Congratulations to all winners and runner ups, and results were: