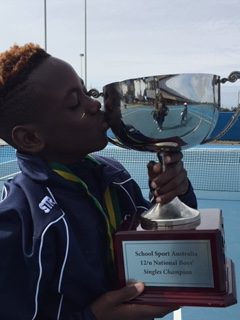 I found the Bruce Cup experience really good.  The tournament was held over two venues in Adelaide over five days. It was good that there was teams and individual events in the same day. So I had to be ready for both. It was also good that the teams were first, that sometimes you can play that same person in the individual event also. It was good because you can adjust your game plan or stick with it.

In the quarters, semis and finals of the individual event I played the same people that I had already played in the teams event. In the final I played really well. I was 4-3 down in the first set, dug deep and ended up winning it. In the second set I broke his serve in the first game and kept my cool and stayed in front and won the match, 6-4, 6-3. I served well throughout the tournament, I moved well, and was consistent and glad to win the tournament.

It was a well organised tournament, and I enjoyed my time in Adelaide.