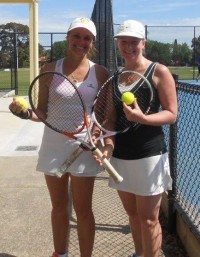 The 2016 club championship is done and dusted for another year.

Many thanks to all that participated in all the events.

This year we had the ladies involved in the championship after a long absence of over 20 years and this created a greater atmosphere among all members who participated. This year was bigger and better with larger entry fields. There where 20 mens singles, 18 mens doubles, 3 ladies singles and 5 ladies doubles. Hopefully next year more ladies would participate.

The championship started on a bleak Sunday morning but the weather held out for the rest of the day for us to conduct the round robin events. This gave the opportunity for players to compete in at least 3 or 4 sets against different opponents. BBQ and refreshments were also enjoyed during the event.

The following Sunday concluded the championships in fantastic warm to hot weather during the day and great quality tennis was on exhibition for all to watch, especially the up and coming young guns.

Again many thanks to all that were involved in the club championships and hopefully next year will be bigger and better, so spread the good word and be in it for 2017.

Congratulations to all winners and runner ups, and results were:

See you next year